Does someone still fly on the Cuckoo's Nest?

It's a film that can hurt very much. It can hurt very much because is about us, all of us. Tells about life, speaks of an ideal of freedom, about the relationship between man and the world, the reality, that reality, system, gear, mechanism, complex and elusive, that Kafka would call "The Law".
Till which point are we able to go to pursue this need for freedom? Freedom as need to know the other possibilities of life, and to be able to do it, to face and to try to win this "law". A law with its rules, bans, often with no justification. Blind and absolute standards and prohibitions, which we “must” follow.
And what about us? Very often we do not realize them, they look normal, logical, we follow them passively. Until “someone” arrives who says that it can not be like that, that may be something different, even much different. Someone who wakes us up from this submitting  to the rules of reality and normality. Breaking our little toy, made of reassuring and unconscious compliance with these rules. 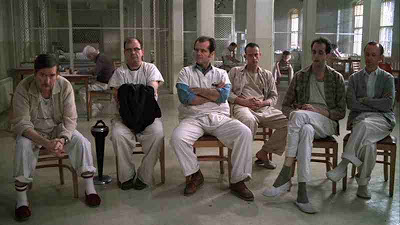 This film can and should be read under this light. We are the sick ones. "The Law", with its tools, trying to flatten the identity of the person, leaving very little, practically no space for freedom. The rules are too many, and we even think (but do we think?) that they are just, necessary.
And that hurts. It hurts to see that you went through life without realizing that maybe you have followed too much what they told you that life would be, without wondering if it could be different. Without someone that always tells you "how it should be". Without autonomy of sensations, of judgment, without being able to have the necessary knowledge to intervene.

Then comes a disturbing element, liberator, and the question that naturally arises is: "But where are we? Who am I? ". Regarding me, this world, and the others.
"In which position do I put myself? I suffer? I agree? I resign myself? I conform myself, because "that's life"?

We often feel that something is not good. But then we start again to follow the path of the current, and when there is someone, maybe an artist, a character that you meet, that puts us in front of the mirror, you look at yourself and wonder: "But how is your relation with life? Can you see yourself alive and vital in it? "
That's what art is for. Art can be used to make us think, because in reality, the space to think is not allowed to us, as the asylum of the film, where there is music, television, physical exercises to make us feel better, all managed by rules. There is even democracy, that "if you do not have the majority you can not."
The film is about all these issues of our reality, our behaviour, our desires, which have become little wishes: to get better, have fun, be safe, to smoke a cigarette.
It's a film constantly "suspended", which transmits anxiety. The same anxiety that winds through us and around us.

This character, this "Someone", this new Christ, is an anomalous hero, acting primarily for himself, because he can not bear a life burdened by the law. A relentless law, leaving no escape. We can say that it is not like this, that is not true, but if we let ourselves be touched by this film and look at our life and its relationship with reality, perhaps we realize that too often do not listen to all signals that can be picked. Maybe sometimes we stop for a moment perplexed, seeing "someone" acting outside the box, out of the rules, but we will continue to "go on", driven by the mass of common thinking and instead maybe we should gradually stay on certain feelings, and make them work, to make them produce in us the first questions, the first hypothesis of change. 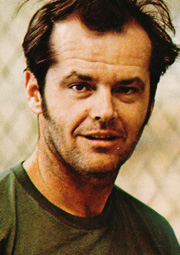 But you must have a clear mind, alert, fresh, awake.
As the protagonist of the film, McMurphy, who wakes the others, who are asleep, who are even "volunteers".
Volunteers of sleeping. Volunteers in the sense that they hide themselves from reality, because they are afraid to show themselves to it, to others, in their inadequacy. They are afraid of being ridiculed and judged, by the inexorable law.
So they go into the hospital. Among the sick ones, among the inadequate ones. Then he arrives, a person that is not contaminated, not conditioned by the system, by the law.
And the Law, inexorably, stops him.

This character is a rebel, but he is always directed toward the others. And this is something that hurts a lot. Because too often we are swallowed by ourselves, by our daily life, our needs, our feeling. It’s our human condition, doesn’t mean that we are bad or selfish. And this is even worse, because in general we care about the other, we are willing to catch him, to understand, to help him, to support him.
But we have so many things to do.....
We have our problems, so we can spend a little time, space and energy to another. 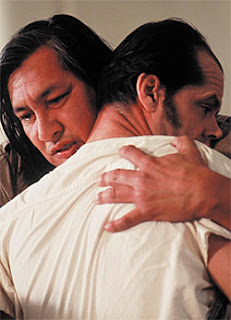 But McMurphy, through an extraordinary work of empathy, enters his language and his dimension, being able to open him and get him to say: "Now I feel as strong as a mountain."
So the Big Boss finds his strength, the ability to break barriers and windows and jump toward freedom.

On one hand there is the reality, the law, the world, and on the other there is me, who are part of reality, but I also want to acquire a role, an active sense in this relationship with reality, and not locking myself,  excluding me in my own little world, but throwing out, all the way.
As McMurphy, a true tragic hero, which leads to his limits and exceed them, making the others live moments of real life.

The Law does not accept him, and deletes him, taking away his ability to think, to imagine, to create. But thanks to him, maybe someone else will be able to fly over the cuckoo’s nest.
Because he has passed, like a comet, that passing has shocked the space, the souls, the rules, the conventions, and then has gone.
He flew away, leaving us his mocking smile, rebellious, definitely human.